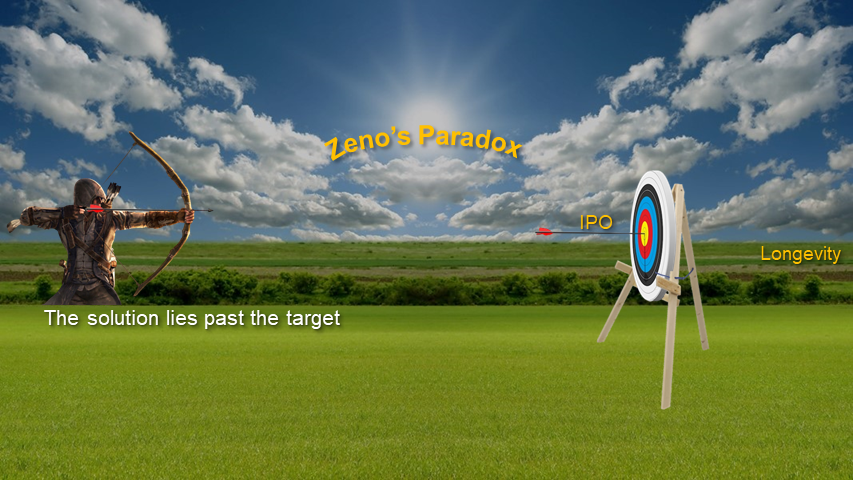 Yesterday was my last day at DataRobot. After almost a year of hope and employment, we’re parting ways. Although our divorce is mutually agreeable and as amicable as these things get, we ultimately have irreconcilable differences, if I can put it in these terms — artistic differences in the entertainment space.

Do you remember the days of analogue copy machines, where each copy is slightly more degraded than the previous copy until you can barely make out what the original might have been? I do. I’ll come back to this.

Looking back, I accepted a position at DataRobot over a competing offer by TCS. DataRobot made a slightly weaker compensation package offer and had a worse risk profile, but I had enjoyed working for another startup at the turn of the millennium, and I thought I was ready for the agile and innovative environment a startup might offer. Besides the startup experience, I also had over a decade of strategic management consulting under my belt. I had helped many companies reach a higher state of maturity, and I felt this positioned me to help DataRobot do the same thing. The signals they returned appeared to confirm this approach. They realised they were immature and could benefit from someone who not only knew what maturity looked like but had helped other enterprises along that path. I felt that I could have a real impact.

Then reality struck. Seen as a system, culture is everything. As Deming’s axiom goes, a bad system will beat a good person every time. My mistake was accepting a desire for maturity at face value. In fact, not only was there no desire to mature, maturity was vehemently resisted.

Part of a mature company is an embracement of strategy—admittedly, even established companies don’t do particularly well. DataRobot is tactical to the core. If there is anyone in leadership who understands strategy, there is no evidence of it. Whilst I am not at liberty to share what was presented as strategy — take it from someone who knows —, any strategy would have had to have been homoeopathic, hence undetectable.

I worked with many smart people at DataRobot. In fact, I can’t think of anyone with whom I interacted who did not come across as intelligent and motivated. Some were motivated well past the limits of a credible work-life balance, but it’s not my place to judge a persons’ own priorities. This said, on a universal level, these people were metaphorical third-graders — perhaps even the tallest third-graders in their class. In some cases, their decisions came across more like prodigious toddlers, but I’m not revealing any secrets here.

The problem with these special third-graders is that many of the problems they are solving have already been solved — likely a million times over —, but they have been solved by fourth-graders or post-graduate students—things like product strategy, pricing strategy, business architecture, employee experience, and on and on. Instead, it seems trial and error is the preferred approach. I feel that this is a cultural challenge.

Copy of a copy of a…

Borrowing from an obscure Nine Inch Nails tune, let’s return to the analogue copy machine analogy and tie it back to people and culture. Many of the top positions are filled by people who shared former employers. This demonstrates the power of networks, but it comes at a cost.

Judging from personal interactions and witnessing implemented and suggested decisions, a couple of things are apparent.

Firstly, the former organisations were immature and made decisions that were obviously expedient but were never rationalised nor fully realised. Any reader has probably been bludgeoned over the head countless times and cautioned with the aphorism not to let perfection be the enemy of the good or even Montesquieu’s take — the better is the mortal enemy of the good. But, this is more of an excuse for mediocracy than for something more beneficial. Moving on.

The problem is that when a person comes from a place where 70 per cent of a solution is ‘good enough’ but the new place sees 70 per cent as a stretch goal so justifies implementing 49 per cent, which translates to 34 per cent at the next place, and so on and so forth. I’m not sure which iteration each of DataRobot’s solutions is in, but none is near 100 per cent.

Secondly, when most employees migrate from place A to place B, they typically arrive at a higher level of responsibility without the commensurate knowledge or experience bump. Whilst imposter syndrome may come into play here, that’s not my concern. My point leans more toward the Peter Principle.

As I began my engagement with DataRobot, the company was admittedly immature, but they had recently employed new management to level up and prepare for IPO. The hiring manager was (and is) a good person. He seemed to get it, so although I had an outstanding offer at TCS, I accepted the offer at the startup.

Although they build and sell advanced technology products in the AI space, the company has backwater operations — a series of Rube Goldberg and MacGyver-built processes with some RNG factor for good measure. The problem is that they seem to have very little interest in improving except tactically in fits and starts. Their focus is on software systems and applications over people and processes.

When I was consulting, a large part of my spiel was on the disruption of digital transformation, about the existential crises of the large enterprise faced with scrappy start-ups not encumbered by legacy baggage. But I missed a crucial point: inertia.

Whereas an idea might be inspired, and inventors and founders might be somewhat innovative and flexible — Agile, if you will — once the company was ready for the big time, they hired traditional, old school talent with anachronistic perspectives. The same rigid, uncreative, a-innovative talent that mires larger enterprises. They attempt to recreate their old environment and implement the same tools and processes. But they don’t have the same luxury of time and money, so everything is done half-assed so long as they can tick some box to indicate some technical compliance but the aforementioned bootleg knockoff version. This ends up being the litmus for maturity. Anything more is excess. It may happen, but let’s be sure we can tick the right boxes first.

Technical debt along with the cousins of process debt and design debt is all just part of the game. And make no mistake, it is a game — smoke and mirrors, legerdemain. These cats are playing Risk or Monopoly with real money. The primary goal is to create just enough structure to get to the finish line and cash out, but it is not sustainable. It will require a lot of rework to unwind — likely more than if they did it right the first time. Again, it feels like an ethical dilemma, but as long as they can sell a product to unwary investors, it’s a success. Short-termism 101. This is the problem with Capitalism at its core. It’s about finding the next sucker. It’s about making sure that when the music stops, at least you have a chair. If there are other chairs and if they will support any weight is a concern for the next person to worry about.

To draw this all to a close, let’s turn to Zeno’s paradox — the image accompanying this post — but without getting in too deep. Zeno’s paradox sets up the prospect that motion is impossible. Although one way of depicting this paradox is with Aesop’s tortoise and hare parable, I like the archery metaphor. The setup to the seeming paradox is that if motion is seen as a halving function—at time₁, the arrow has travelled half the distance, and at time₂, it’s travelled half of the remainder, and so on ad infinitum—, how can it ever reach its target? It approaches the limit of zero, but never reaches it. A distance of ½ becomes ¼ becomes ⅛ and so on infinitely — (½ + ¼ + ⅛ + …).

Approaching a limit of zero is not the part of the story I want to focus on. DataRobot may or may not reach zero — IPO. The point I want to make is the solution to the paradox. Once one realises that the target is beyond the end-point rather than the end-point in and of itself, then the paradox is no more. It never was. This paradox was the result of a framing problem — of not being fully aware of the domain.

In the case of DataRobot, I feel that management is fully aware that there should be life beyond the IPO target. They just don’t seem to care. Any architecture not strictly necessary to reach IPO is disregarded or marginalised. To claim that no one is responsible for creating architecture or strategy would be an overstatement, but I feel comfortable claiming that there is no evidence of anyone with that capacity or inclination. Make no mistake. I am not claiming there are no goals. There’s just no strategy to reach them. It’s all tactics.

For my colleagues left behind, I wish them well. I also wish that DataRobot doesn’t crash and burn just after it crosses the finish line or that some turnaround team isn’t needed to resurrect a dying horse collapsing at the end of the race due to neglect. I’d hate to see them win the battle but still lose the war.